We are open and shipping Read Here 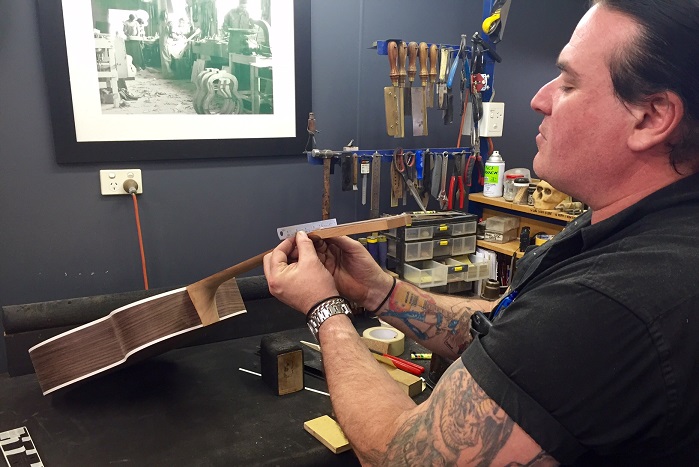 Since being founded in 1946 Maton Guitars have grown to be not only Australia’s biggest guitar company, but one of the most well recognised guitar manufacturers in the world. There use of native timbers have made them the go to choice for a number of huge names in the guitar world such as Tommy Emmanuel, Eric Johnson, Josh Homme, John Butler, Paul Kelly, Neil Finn and countless others. For quite a while now, Andy Allen has been the main man of the Maton Custom Shop at their Melbourne factory. We recently had a  chat with Andy about what got him involved in guitar building, his thoughts on the future of the acoustic guitar industry and what we can expect from Maton in the not too distant future.

Hey Andy, thanks for taking the time to have a chat with us. You’ve been the head honcho of the Maton Custom Shop for a little while now. Let’s maybe start with a bit of a background on where the whole music thing started for you. When did you start playing? And where did the interest in building instruments stem from?

It has to be KISS or Led Zeppelin. Jimmy Page or Ace Frehley were my idols as a kid. I was mesmerised by them growing up. Truth be told I was actually mesmerised by their Les Paul guitars. Anyone who played one on Countdown, or any television show that had music on it, I was intrigued. I loved the look of that guitar and I still do, it is just a classic. I have a collection of them myself now
guess I never really grew up from those early memories of guitar. You could even say Red Symons of The Skyhooks had a major effect on my love of guitar. He was playing Les Paul’s and doing it right here in Australia with The Skyhooks. Jimmy Page and Ace Frehley were so far away but Red Symons was right here and playing that guitar. I just love it!

Did you have any particular mentors or training with other luthiers that helped you in the early days?

My number one mentor was Ron Smiley without doubt. When I first joined Maton I was a little overwhelmed at what lay ahead. I tried to talk to other guys my age early on to get the good oil but they really just confused me. Ron however took me under his wing and taught me the process of building guitars properly
Old School. Everything from bending sides and fitting necks right down to sharpening my chisel and what glue goes where. He was incredible. When I arrived at Maton he had already been there building guitars for over 30 years. That blew my mind! My first day of school, my first girlfriend, my first gig  everything. Every day in my life to that point, Ron had been at Maton building guitars.

||Maton had a pretty stable lineup of instruments for as long as I can remember but recently we’ve noticed a lot of movement in the models available. Can you explain a bit of the thought process behind retiring models such as the 225, 325 etc and the introduction of the new models such as the SRS, all Mahogany and Heritage Series?

Expectations Changed. The Market changed. Some of the changes we made were enforced and some were by choice. SRS guitars were developed in The Custom Shop and many of the upgrades in tone, geometry and quality are the same processes  give or take  that I use on my guitars. We wanted to make a better product and be more competitive on the world stage. Dont get me wrong, I still go to pubs and venues and see guys bashing it out on their EM325Cs and they sound mighty and they truly are Road Warriors. But expectations changed and we had to change with the market expectations. All Solid guitars were becoming more and more affordable and we were not on that page yet. Queensland Walnut became unobtainable and our successful yield rate on laminate materials was shrinking. Our hand was forced. If we could still make 225s and 325s we would but the writing was on the wall and we had to move. We are really happy we did and sales are really strong as is Domestic and International Demand. So SRS is where we are at the Heritage and M series were and continue to be really positive road signs along our journey.

Is there anything in particular about the SRS60C and SRS70C that you think contributes to their popularity? Is it just that they are the most affordable models or is there something in those models that you think represents Maton really well for where they are priced?

As mentioned before, it is quite a new build philosophy. The geometries have changed as has the bracing and hence the tonality. They are more comfortable and feel better in your hand. These are all developments we found in the Custom Shop. The guitar comes together in a way that is new
.more so than just the great value add of being all solid. It took a lot of time and many, many prototypes but when we found the right combinations we were all sure we had kicked a goal. We then took it to our retail partners and they knew also. Finally the most important people gave us the tick of approval  The end user. The Maton owner!

Can you tell us a little but about the new Custom Shop Flatpicker?

Every time I was working on my guitars and trying new things out, I would take the prototypes to stores and try them out against the competitors. The guitars that sat nicely in the exact same price point and build quality to my guitars. I was playing my Matons against Martin, Taylor, Collings, Santa Cruz and so on and I kept noticing the same things. Every Shop Guy kept handing me Dreadnoughts to compare. So clearly I had to have a Dreadnought! I am really proud of this guitar. It sounds incredible. Its all about the BOOM! The bottom end for days that people want from their acoustic guitar was ever present in other brands and I added that to The Flatpicker. It truly is a worldly flat top acoustic guitar tone in this model and I hope many people try it out.

The other reason I decided to make this guitar was for The Maton Custom Shop. What I mean is that most of my guitars to this point had been hand made for individual customers who had hand selected their own timbers and inlays and then waited for me to make the guitar to their spec. Problem was that I was making these great guitars that looked and sounded incredible and they would go straight into someones lounge room or studio. They would never make the Shop Wall. So we set about making 3 models for The Custom Shop that were standards. Repeatable models that stores could choose from or carry all 3. This would get Custom Shop some wall space and alert the punters that it existed and hopefully get them thinking they were really nice guitars. We still do customise guitars for people but this way they get a chance to discover and get an idea of what to expect.

||Any new guitars that are on the horizon you can tell us about?

Well the Custom Shop has been around for 10 years so I have a limited edition of 10 guitars coming out a little this year. 10 models ONLY that are representative of the 10 years the Custom Shop doors have been open. The first few are through now and, even if I do say so myself, they sound amazing. I am really proud of these 10 guitars and I feel that they have achieved what I set out to do when I started them. Watch this space……

In the last few years there’s been a huge rise in boutique manufacturers, not just in guitar but in most musical instrument fields. With the likes of Collings, Santa Cruz etc. people . now looking at buying an up-range acoustic are no longer limited to the Martin’s, Gibson’s Guild’s and Maton’s of the world. What kind of effect do you think this has on more heritage guitar companies? Does this put any pressure on someone like Maton? Particularly in the Custom Shop.

I think it just adds to the education of what makes a really good guitar. It raises the bar for everyone, the boutique builders also. The internet changed the way people educate themselves and finally buy guitars. As this information about these companies grows the more the discerning guitar buyers will know about good guitars. It helps inspire and improve everybody. For Custom Shop I love the challenge!

As far as our production guitars go, I think they are different beasts really. If you are a gigging muso or a bedroom thrasher you cant really beat Maton. Full Stop. Plugged in or acoustically learning or practicing I think Maton is really hard to go past. The boutique guitars will affect a higher price point no doubt, but I still see our bread and butter production guitars flourishing. They are awesome.

In Australia it seems like every second person you see playing an acoustic guitar is playing a Maton. Though where do you see Maton in the global marketplace? How do you see yourselves growing the brand worldwide?

This is really an area of great focus for us at present. Australia is our number 1 priority but with guys like Tommy Emmanuel and Eric Johnson flying our flag overseas we need to act and act now! A better presence overseas will see us better placed in Australia also. We are currently available in Asia, USA, UK, Europe, NZ and so  many more areas but we are focusing our attention on increasing our presence in these markets daily.

Being a guitar luthier i’m sure you’ve played your fair share of other acoustic guitars in your travels. Is there any particular companies work you admire? Or has there been that one (or few) guitar where you played and thought “Wow this guitar is a step above the rest”?

Other than Les Pauls ? (LOL) I like so many things about so many other guitars. I love Martins and Santa Cruz, Collings and Gibson. I love Bob Taylors guitars and his company for so many reasons. He and Andy Powers are real innovators. There are really great guitar builders everywhere
Lowden.

Lastly, I don’t know if it still says this on the Maton site but it definitely used to say that if Maton employees get the opportunity to build a custom guitar, then the most common choice for back & sides timber is blackwood. So if I’m going to ask you to build me the best Maton you can. What’s the Andy Allen Special?

Anything Blackwood. Because I have lived it with Murray (Kidman) our Lumberjack so many times. I have helped him fell the single tree, carried it out of the forest in slabs on my shoulder. I feel at one with Blackwood because I have been schooled on it and used it for SO LONG! I love its tone, its appearance and it is Australian. It has a voice unique to this country and I love it.

Anyway thanks for the chat Andy. we’ve been really enjoying the last couple of Flatpicker’s that we’ve had a chance to have through so far. We’re really looking forward to what’s next with Maton!

Thanks for having me!

You can browse World of Music’s range of Maton Guitars here.

The Craft: Behind The Scenes Of The Fender American Standard Build Process