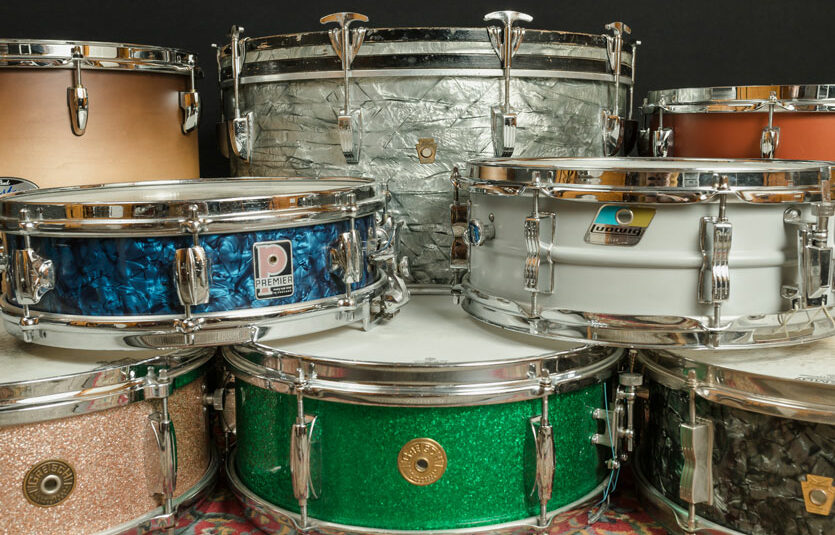 There are many factors that affect the sonics of different types of snare drums: shell thickness, plies, hoops/rims, bearing edges, wires, grain configuration, head, tuning and size. For the sake of this exercise however we will focus mainly on the materials used and typical snare drum examples to help you decide what might be the right snare drum for you.

Traditionally snare drums are made in a solid shell (stave, segment, steam-bent, truly seamless) or a ply shell format using different metal and wood types, but before we begin to elaborate on the sounds of different snare drum materials it’s important to briefly touch on a couple of major factors that play a part in the overall tonality and response of a snare drum.

HOOPS/RIMS: Typically hoops are either triple flanged, die-cast or wood with wood producing the warmest sound and die-cast the brightest.
BEARING EDGE: The way a bearing edge is cut on the snare shell affects the way the drum head sits on the shell, therefore changing the way the drum sustains and the tuning range of the shell. There are several styles of bearing edge typically used: A 45 degree is usually cut close to the shell edge and results in a brighter sound with great attack that’s often associated with modern drums. A dual 45 degree edge is again a modern method yielding similar results but has a longer sustain, given that the peak of the bearing edge is in the centre of the shell. Roundover type bearing edges are more associated with earlier “vintage” style drums giving a shorter sustain and more fundamental note. A roundover style bearing edge has a lot more head to shell contact which is why they have a warmer, mellower sound comparatively. There are of course variations on these and even hybrid designs nowadays, on top of all of this the way your snare is tuned can also be affected by the type of bearing it features.
WIRES: The amount of strands on your snare wire will change the amount of snare response and decay from your snare, with more wires acting like a muffle. In essence, more strands equates to more snare sound and less strands to more sound from the drum itself.
TUNING: The tension of the bottom but most notably the top head can greatly affect the sound and response of a snare drum. Tuning can vary the sound potentially more than any other factor and is something we have complete control over. We often tune the snare drums higher or lower to get a different transient response off the top head in order to sound more sluggish and fat as opposed to tight and responsive (for example).

SIZE: Shallow depth shells will give you a clearer, purer tone with more resonance but won’t project as well as a deeper shell. A deeper shell will deliver a lower note and have more projection. Hence, smaller drums are more popular for jazz and bigger sized drums more common in rock music. Shell size will also effect the pitch of a drum regardless of tuning.

Brass: Brass has a bright sharp cracking sound with mellow overtones and is a favourite of many metal shell enthusiasts. Brass shells are often coated with nickel and chrome to give different variations of tone hence the terms chrome over brass. Rogers Dynasonic (chrome over brass), Ludwig Black Beauty (nickel over brass).
Aluminium: Like maple, aluminium is almost the standard for metal shell snares. It has a very clear open sound with a flat sounding response with little sustain. Aluminium is known for delivering incredible sounding rim shots with crunchy overtones and would easily be the most recorded snare drum type of all time. Ludwig Supraphonic, Ludwig Acrolite.
Copper: Drummers often choose copper shell snares if they liken the response and sound of aluminum/brass snares but want to go warmer and darker in tonality. Copper has a cleaner sound than brass which can make it sound less musical. Craviotti Copper.
Steel: Brighter than Brass with seemingly pronounced body and overtones. Often described as an uglier sound than most metals and is favoured by hard rock metal drummers the world of over. Pearl Export Series.

Bronze: Bronze is very similar to Copper in its sound but Bronze tends to have more resonance and ringing overtones. Overall has a lower note than brass snares again darker in tone. Joyful Noise Studio Line Bronze. 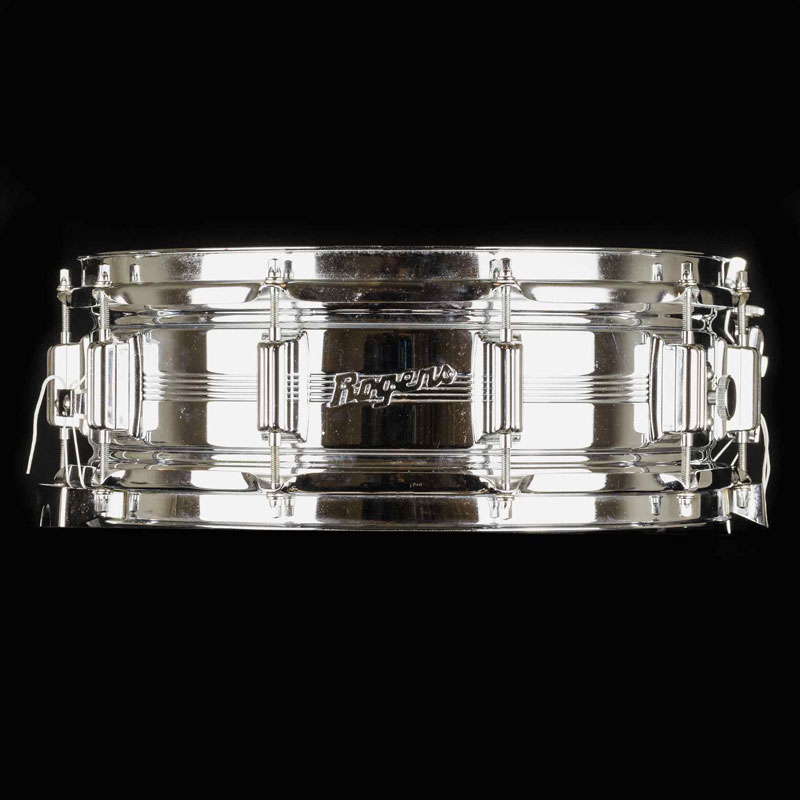 Maple: If there was such a thing as a standard wood used for drum shells it would be maple. It’s warm but it’s mids and highs sit just right comparatively in their response volume. DW Collectors Series Maple, Slingerland Radio King.
Birch: Birch delivers much more high frequency content than maple and a punchy low end giving it a somewhat focused sound. Snare drums made of Birch tend to project really well for this reason. Birch is a common modern alternative to Maple and is popular amongst jazz players or rock players that want that fast, lively sound. Premier Royal Ace.
Mahogany: Often referred to as the vintage wood for drums, Mahogany was used in plys of shells in many classic drum kits. Very warm in its overall tonality, mahogany is heavily favoured by recording engineers for that classic drum sound paired with thinner 3 ply shells. Mahogany also gives you quite a short note with little sustain, which is also why its so desirable in the studio. Ludwig Pioneer Series.
Poplar: Poplar is a softer wood and for decades has been commonly used as an inner ply paired with Maple and Mahogany. Gretsch Broadkaster, Pearl Firecracker, Ludwig Jazz Festival.
Oak: Oak is loud! It tends to have an extended bass response compared to it’s mid range and high end, which offers a unique alternative to Maple and Birch.Yamaha Oak Custom.

Beech: Due to its boosted low end and mid range compared to its high frequencies, Beech is considered a warmer tone to Birch, for example, even though it’s of similar hardness. A rougher grain is the reason for this and therefore it sits closer to maple in terms of warmth but has the mid range cut of Birch. Sonor Accent Studio. 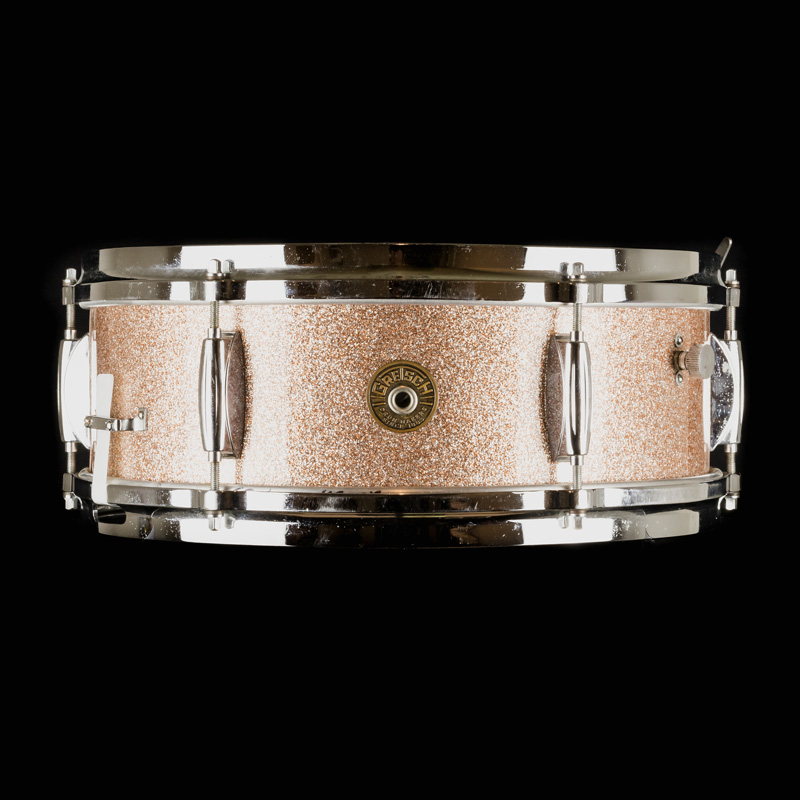 These are of course just guidelines and remember that your ears are always your best friend. For many drummers the question isn’t which snare but how many snares, though hopefully this has been of some help in your quest for snare drum glory.

You can browse some of our range of Snare Drums here.

The Golden Age of Advertising